more from inside 'Stealth'

Foreign Policy magazine offers an excerpt from Stealth of Nations.
Posted by rn at 5:56 PM 3 comments:

so you want faster growth?

The lede in this Express Tribune article says it all:

The informal sector in Pakistan has grown more rapidly than the formal economy over the last three decades and while estimates vary a great deal, the size of the informal sector is not less than one-third of the country’s gross domestic product (GDP).

Here's an odd counter-narrative. The hawkers who sell grilled meat at Marina Glen Park, in the South African coastal city of East London, are pleading with the municipality for increased regulation. Why? Well, as The Dispatch reports, "opportunists"--who the article identifies as teachers, government employees and others--have been poaching on the hawkers' turf, setting up their own stalls to do braaing (as grilling is called in local patois.) The increased competition is apparently steeply curtailing the profits of longer-term hawkers.

“These people have jobs, they are being paid salaries, but they come here to make even more money while putting us out of business,” Mambamba Mnwana, chair of the Ebuhlanti Hawkers Association, told The Dispatch.

So the unlicensed hawkers have petitioned City Hall to monitor their business and protect their incomes. A spokesman for Buffalo City Municipality, as the East London political apparatus is known, said some of the issues the hawkers raised were compelling.
Posted by rn at 2:10 PM No comments: 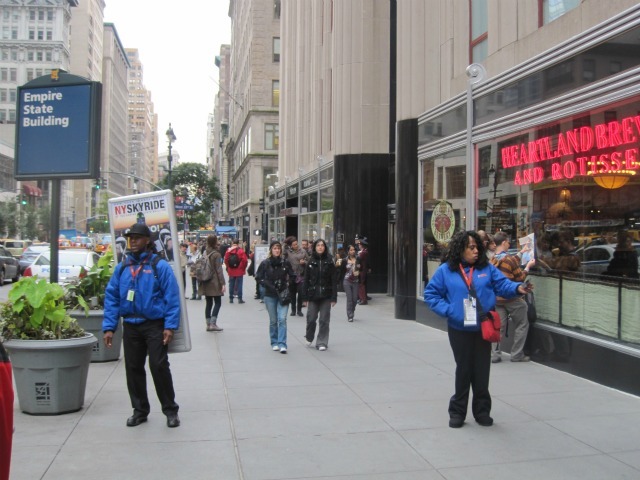 The dispute involves the guys who stand near 34th Street and 5th Avenue and hawk tickets to an Empire State Building virtual reality ride. They wear uniforms of the company that runs the ride, and they have been an almost constant presence on the block for years. But only recently has their presence drawn police action.

While there may be legitimate concerns that the vendors prey on tourists who think they're buying entry to the Empire State Building tower and then discover they've only purchased the access to the video version of the view, the problems caused by the vendors sound pretty paltry:

Many in the community say they’ve had to avoid Fifth Avenue between 33rd and 34th streets whenever possible to steer clear of the vendors. Local residents, building managers and office workers had repeatedly complained of harassment by vendors, whom they accused of blocking sidewalks, accosting tourists and driving neighbors nuts with their constant ‘Going up?’ pitch.

This is ridiculous. I'm on that block often, and the vendors are hardly the threat the residents make them out to be.
It's also worth pointing out that giving desk appearance tickets that will be argued in court waste police, corrections, and court time. The police have to show up in court for the violations to stick--which pulls them off the street. And vendors beware: if you don't go to court to deal with your ticket, a warrant will be issued. And if you get caught again before settling the warrant, you will spend the night in central booking. That's right: in today's overly-securitized city, two non-criminal citations can buy you a night in the slammer.
DNAinfo has more details of this wild NYC ride.
Posted by rn at 1:45 PM 1 comment:

I will try to avoid posting too many plugs for my book on this blog. But I can't resist popping this one up: You can listen to me today in an interview with the National Public Radio show Fresh Air.
Posted by rn at 10:00 AM 2 comments:

the book on the blog

Stealth of Nations, the book, hits the stores tomorrow. On Saturday, the The Wall Street Journal reviewed it. And you can get a taste of what's inside the covers on Bloomberg View.
Posted by rn at 12:31 PM 2 comments: