Street hawkers have multiplied recently in New Delhi's Connaught Place, and the Daily Mail newspaper claims that the entrepreneurial invasion is blocking traffic and 'compounding the misery of commuters.' Though the police claim that only 97 vendors work around the circular shopping arena, the newspaper counted 800 street sellers. I was in Connaught Place late last year--and the big culprit for congestion was the government's rehabilitation plan, which involves tearing up vast swatches of the circular market and is creating massive interference of traffic and pedestrian flow. There were hawkers all around the market--and I can well believe there were 800 of them spread around the various lanes of the Connaught Place installation--but they hardly were the impediment the newspaper makes them out to be. Their stalls were orderly and blocking traffic (the Daily Mail's own photo shows a hawkers market that is not blocking traffic.) Indeed, the biggest impediments in the market were the sad profusion of stray dogs, who seem to be almost universally despised by merchants and commuters alike and the number of empty storefronts--most likely a result of speculation that rents will go up following the completion of the government's rehab effort.


Being punitive towards the hawkers is no solution. Rather, it's important to work with the street vendors to improve conditions for everyone.
Posted by rn at 7:48 AM No comments:

Rescinding a ban on street vending passed in late February, the government of Mozambique's capital has vowed that it is not against the city's 80,000 hawkers and roadside sellers, Mayor David Simango has announced.

Simango told vendors from the massive Estrela, Mandela 1 and 2, and Museu markets that he never intended to shut down all street trading and that his hope was only to stop people selling outside schools, hospitals and other sensitive establishments. "We are not against the activity of the informal sector, since we know that people are selling on the streets not out of pleasure, but as a question of need for their survival," the Mayor said. "But we have to find ways of developing informal trade without creating problems for everybody else."

Simango apparently wants vendors to clean the streets around their stalls twice a day (the current requirement is twice a week), to obey the rule requiring them to cease doing business by 9 pm, and to cease doing business on streets near schools and hospitals. While appropriate street cleaning may make sense, the ban on nighttime selling and the idea that vendors should voluntarily leave locations where demand is high seem counterintuitive and counterproductive.

the harsh life of a street vendor -- in Oakland, CA 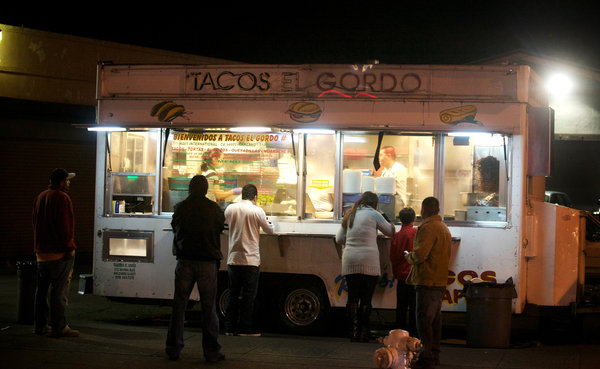 The New York Times & Bay Citizen report on the gun violence that plagues East Oakland's International Boulevard, one of the only streets open to mobile vendors. A five-year-old died on New Year's Eve, hit by a stray bullet from a barrage directed at his father's taco truck.

There are only 34 licensed vendors but 126 members of the recently formed vendor's association--suggesting that the majority of vendors are part of America's informal economy.
Posted by rn at 9:28 AM No comments:

These fragments come from Alain (Emile-Auguste Chartier), The Gods
Posted by rn at 12:19 PM No comments:

it takes a tough person to make a tender vender

Two different versions -- one censored by the Chinese authorities, one unexpurgated -- of Tricia Wang's adventures with a family trying to break into unlicensed street vending in Shanghai. It's a tough life, whether censored or uncensored.

[another tip of the fedora to Zach for sending these street stories my way]
Posted by rn at 11:11 AM No comments:

"A place is ecstatically proclaimed (the West), a name is sacralized as unique (the Market, Democracy) and terror is exercised against that which ought not be -- the impoverished planet, the distant rebel, the non-Western and the immigrant nomad that radical abandonment drives towards enriched metropoles."

That's Alain Badiou on the error of totalizing philosophy--and, by extension, the political disaster of the modern world--from his book Conditions. Badiou calls for asserting "the local existence of truths" rather than "offering ecstasy at the place of truth."
Posted by rn at 4:54 PM No comments:

show me the mobile money

Tanzania's formal banking and financial system holds about Sh13 trillion, the paper reports, with approximately Sh2.3 trillion in circulation at any given time. But Mafuru suggested that mobile banking was bringing lots of money from the informal economy in from the cold. “At any given moment of the day about Sh1.5 trillion is transacted in the mobile banking systems,” he said. With only 3 million of the country's 20 million mobile users signed up for mobile banking, informal merchants are likely to find a big upside in joining the bitmap banking revolution.
Posted by rn at 11:20 AM No comments: