show me the money 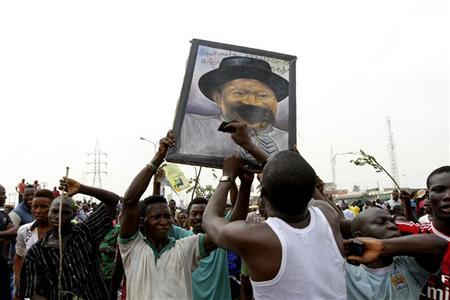 Oddly, the most sensible declaration has come from an academic: "A really determined effort to stamp out corruption would itself be massively destabilising," Stephen Ellis, a historian at the Africa Studies Center at Leiden University in the Netherlands, told Reuters about the general strike that has paralyzed Nigeria in the week since the oil subsidy was ended. "It can only be done gradually."

The free market absolutists at The Economist magazine may have been in favor of lifting the subsidy immediately. But this showed absolute ignorance of the mechanics of the subsidy. As Alexandra Gillies, of the Revenue Watch Institute, writing in the Huffington Post, noted, the oil subsidy was itself a form of official corruption:


In 2011, the subsidy on gasoline cost the government over $9 billion, more than the entire federal government capital budget and about double the subsidy's cost in 2010. Global fuel prices did not, of course, double during this time period. Nigeria's tab skyrocketed thanks to the costly, corrupt system by which the country produces and imports gasoline, as well as rising interest charges and insurance premiums as government failed to pay fuel importers on time. By the end of 2011, Nigeria owed importers over $4 billion. Relying on the Nigerian National Petroleum Corporation (NNPC), the national oil company, the government devised complex, opaque methods for covering import costs, including swap deals where crude oil was awarded to commodity traders in exchange for gasoline and other refined products.

Nigeria's Socio-Economic Rights and Accountability Project (SERAP), has asserted that the fuel subsidy was hidden from the budget:  "While 250 billion naira was allocated for fuel ‘subsidy in 2011, by the end of October 2011, over 1.3 trillion naira has been spent. We have information to the effect that the subsidy claim rose to 1.5 trillion naira by December 2011... Having found that no supplementary appropriation was submitted to the National Assembly by President Goodluck Jonathan, we would be grateful for information on who authorised the release of the sum 1.26 trillion naira, which was paid by the Central Bank of Nigeria.”

Gillies wants the subsidy to end, but pointed out a conundrum: "High oil prices and increased production should have made 2010-2011 the most profitable years yet for the Nigeria. However, the country's economic health worsened. Budget deficit estimates exceeded $8 billion in 2011 and, over the last three years, foreign reserves dropped by 40 percent and public debt doubled." She said this "paradox of robust revenue potential and declining fortunes" could only be solved through comprehensive reforms.

But, in simple political terms, you can't ask the people to suffer in order to pay the big corporations (Well, I guess you can -- we did it in the U.S. in order to bail out the "too big to fail" banks -- but it hasn't made people's lives any better.) The Nigerian government contends that gradual lifting of the oil subsidy won't work because "investors will be discouraged" and "smuggling and rent-seeking behavior will continue." But the profiteering's going on anyway and the so-called investors are the companies who've been profiting from this clandestine system for years. A friend in Enugu tells me that some petrol there is going for 300 naira per litre -- double what the supposedly free market price is.

If there is to be a comprehensive solution--as Gillies wants--everything has to be transparent. How are all the deals currently working? Who's making the most money? How much has corruption siphoned off from the federal treasury (Nigeria's former government anti-corruption crusader Nuhu Ribadu has estimated that boodling cost the country $7.6 billion a year for the past 50 years and a recent report in Nigeria's Vanguard Newspaper asserted that the country's congressmen and senators are being paid more than $1.5 million a year--an amazingly high amount.)

Until all the dirty financial linen is aired out in public, it's no wonder the people are skeptical. The strike shouldn't stop till the cronies come clean.
Posted by rn at 12:28 PM