if Detroit were a developing world country 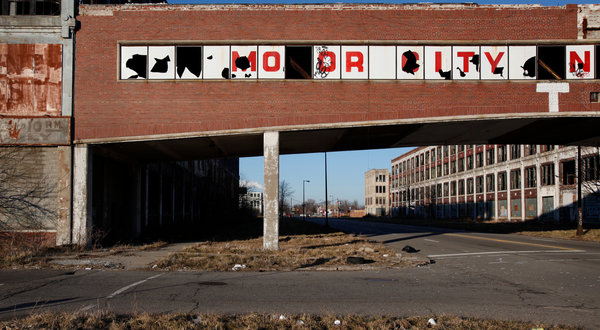 An article in The New York Times about Detroit's fiscal problems got me thinking: what would we urge for the troubled city if it were its own country.

1. Debt relief: why can damaged developing countries restructure their debts, but a city like Detroit must always repay creditors? Detroit's problem is like Greece's. Tied to the single currency of the dollar, the city is being forced to cut back at a time that it should be investing.
2. There are 30,000 acres of vacant land in the city (according to a recent editorial in the Detroit News.) If we can believe that number, it's 2/3 of the land mass of the city. Astounding. And a resource too. What should be done. Instead of seeking large-scale plans, the city could become an urban laboratory. Open the land up to markets, to the informal economy. Sponsor a challenge: build a code-worthy home in a day and you'll own it. As the editorial suggests, urban farming can play a role, too. Tilling 5,000 acres could apparently provide 70 percent of the food the city needs and employ 28,000 people (this would cut the city's unemployment rate almost in half.)
3. At the same time, the city plans only to provide services to stable neighborhoods, while continuing its policy of destroying and demolishing dangerous ones (see this article from Crain's Detroit Business, which notes, "In steady neighborhoods, demolition of dangerous structures won't be a priority but will be a top priority in transitional and distressed neighborhoods.") But look at this map produced by the Mayor's office. The majority of the city--the blue and gold areas--are vulnerable. The city plan would essentially give up on 2/3 of the city. Giving up is not a plan.
4. Detroit has an opportunity to investigate how to develop a city based on anarchist/libertarian principles of squatting (see columnist Mitch Albom's sensible proposal that the working poor should re-occupy the city's vacant land and buildings), the creation of informal businesses (why not allow people to run unlicensed businesses out of their homes), and fostering cooperative actions, such as community currencies designed to maximize the amount of money spent locally. Let unplanned, unlicensed, unregistered creativity sow the seeds for the future of the Motor City.
More ideas, please!
Posted by rn at 7:44 AM