turning most citizens into criminals

So far, the vendors are bravely resisting, reports The Daily Independent.

As Mansur Abdulhamid, a young Kaduna vendor, tells the paper, "Will driving away traders from the streets solve the security and economic situation in the state? Look at me, I have to hustle daily to meet with demands at home from my aged parents, rent and feeding and this include saving something little for my education."

The governor must know that street vending and hawking and other System D activities are the dominant way that people in all over Nigeria survive. It has been estimated that more than two-thirds of the working-age people in Nigeria earn their money off the books. That makes System D the majority economy. It's time for politicians to understand that, if they outlaw street trading, they make criminals of most citizens.
Posted by rn at 6:33 PM No comments:

Something happened at 5,000-merchant-strong Ladipo Market, Lagos, Nigeria's famed auto spare parts mall, a few weeks back. But exactly what is hard to tell from afar.

On July 1, newspapers reported that the local and state governments had, without warning, moved in to demolish the market. The following day, government officials denied that story, suggesting that they were working on a redevelopment plan to improve the streets in the market.

Two days after that, traders totaled their losses at 100 million naira - or around half a million US dollars. They argued that government thugs, working with the police, had looted their products. Some observers suggested that the state government was engaging in a political vendetta against market leaders who had supported a rival party. Others argued that this was a tribal clash.

A few days later, the dispute was still festering. And at the start of this week, the market association hired a lawyer, presumably to advance their case in court and to lobby for them with the government.

I have seen a number of photos purporting to show the demolition, but none of them have shown the extent of the action.

So will someone who knows what really is going on please explain...
Posted by rn at 10:13 AM 2 comments:

Now here's a great thought: home mortgages for the vast numbers of people in System D. Caroline Wangui Kariuki, managing director of The Mortgage Company in Kenya, made the suggestion in an interview with the women's section of Standard Digital. Money quote:

“The pay slip and its contents determine if you will own a house or not. That is very unfair to the millions in the informal sector with fluctuating earnings. There must be a way of harnessing their earnings through a mortgage tailored to their circumstances,” she says.According to Caroline, the Government as well as financial institutions fear the risks associated with this group, especially because cannot be assessed in terms of along term income.This, she says, is a shallow way of looking at this category. There are precedents showing how the micro- finance sector has harnessed the small earnings in the informal sector to boost their financial base.“If banks such as Equity have found ways of assessing the risks associated with banking the informal sector, surely they can come up with ingenious ways of financing the home market using the same principles,” she says.

Exactly! And not just in Kenya. All over the world. The global majority works off the books. Banks are more than willing to take their deposits but won't give them loans.

Suggestion to System D workers: don't put your money in a bank that won't work with you.
Posted by rn at 4:15 AM 1 comment:

what's a little irrationality among friends?


Some friends celebrate the informal and underground economy. Maybe they are right to the extent that the poor are at least able to survive as formal institutional arrangements of our national economy are not only limited, they are also exclusionary and pro-rich. But who is actually making the real buck from the informal economy? The same idle rich class, isn’t it? This class absolves itself of any duty of care for its workers when economic activity takes place in the informal sector.

True. The rich have a way of profiting from every kind of economic relationship. But there's nothing less devious or more caring about the formal economy. Being part of the formal economy doesn't automatically mean owners feel a 'duty of care' for those laboring under them. And, indeed, formalization often takes away some elements of control that workers in System D have over their labor and their lives. Things that are irrational and inefficient in economic terms can also be positive and creative in social and political terms.
Posted by rn at 2:45 PM No comments:


Meaning that 86.5 percent of the new jobs in the East African nation were off-the-books and informal. That's some economic engine.

As the Standard says, "Despite being essential in employment creation, the informal sector has largely operated with little support from the government, which to a large extent failed to offer a conducive environment."
Posted by rn at 4:54 PM No comments:

Brazil wages war against 20% of its population

How long can a country pretend to be a democracy and treat 1/5 of its population like criminals. That's my thought after reading this article, about continuing violence in Rio's favelas. Since when is supposed safety on the highways an excuse for moving tanks into a working class community? Since when should police not care that the drug dealers are a minority in these self-built communities that are home to more than 1 million people in Rio and tens of millions across the country?

What would you feel if a major sporting event came to your city and, in preparation, the police moved tanks and guys with assault weapons in front of your home?

Yes, the drug gangs are heavily rooted in the favelas. But they are an opportunistic infection. They made merry in the self-built squatter areas because the government pretended those communities didn't exist and treated all the people there as lower than 2nd class citizens. The police are not people's friends. In my time in Rio --  a dozen years ago now -- I was only harassed or threatened with guns by the cops. The police represent an alien unwanted occupying force doing no one no good.

Even calling this program pacification is sick. There's obviously nothing peaceful about it.
Posted by rn at 9:39 AM No comments:

everything from self-development; nothing from the government 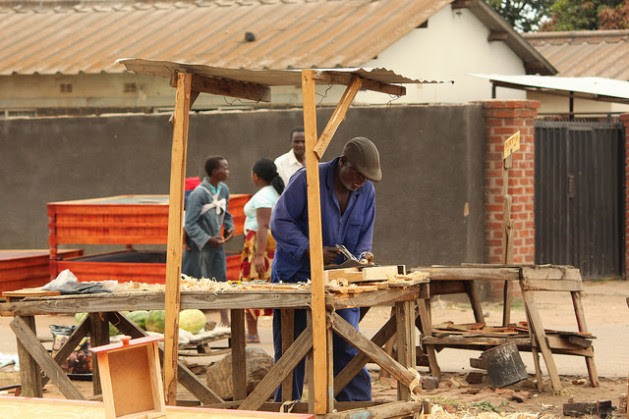 Buried in this article from the InterPress Service is this fascinating factoid:

In Harare, there are now 18,500 people working in informal carpentry, up from 7,000 five years ago. During the same time period, formal carpentry jobs fell by almost the same amount, declining from from 22,000 to 13,000.

Conclusion: the jobs have moved off the books. As Tracy Chikwari, a 36-year-old single mother and System D entrepreneur told the news service, "I bought two houses here in Harare by trading in furniture that I guy from the informal market and I have no doubt this feat is taking me to greater heights."

An anonymous official complained to IPS that the carpentry business is so strong that the government is losing $32 million a month in unpaid taxes. But, as one sensible carpenter noted, taxation is a social contract: "Paying the government tax for our activities depends on what we also get from them. But we are getting nothing."
Posted by rn at 7:21 AM No comments: