On a seriously good day, Biamungu, who lives in Goma, in the Democratic Republic of Congo, makes 10 euros, transporting goods on his handmade wooden bicycle, called a tshukudu.

"I make sure to bring home the basic necessities: flour for the fufu [cassava paste], cooking oil and salt. If I have some money left, we feast on tomato sauce or meat," he tells Radio Netherlands (via allAfrica).

Being a tshukudeur is incredibly taxing work -- requiring brawn and energy. And his work has been made harder by the rebellion and conflict in that region of the DRC.

Two caveats about this report, though:

first, I cringe when any reporter, no matter how sympathetic, says, "Riding his large wooden bicycle, Biamungu, with his muscular, sweaty body, looks like a character from a novel."

second, in many African countries, fufu, sometimes called garri, is the staple food. I ate vast quantities of it every day in Nigeria. When I was in Kenya, I ate massive amounts of ugali -- a similar starchy sponge concoction made with corn. Though I am sure Biamungu's family's limited diet is nutritionally lacking (I most often had some vegetable stew and a small piece of boiled meat with my plate of fufu), a messload of starch and carbs was, to me, the perfect way to eat in that climate.
Posted by rn at 5:21 PM No comments:

the street market of life

Juan Goytisolo's novel Makbara, which starts in the 'self-confident Eurocraticonsuming city' of the West, culminates in an appreciation of its Hegelian antithesis--the street market (his real-life model is Jemaa el-Fnaa, in his adopted hometown, Marrakesh):

'an agora, a theatrical performance, a point of convergence: an open and plural space, a vast common of ideas
peasants, shepherds, soldiers, tradesmen, hucksters who have flocked to it from the bus terminals, the taxi stands, the street stops of the jitneys poking drowsily along: coalesced into an idle mass' 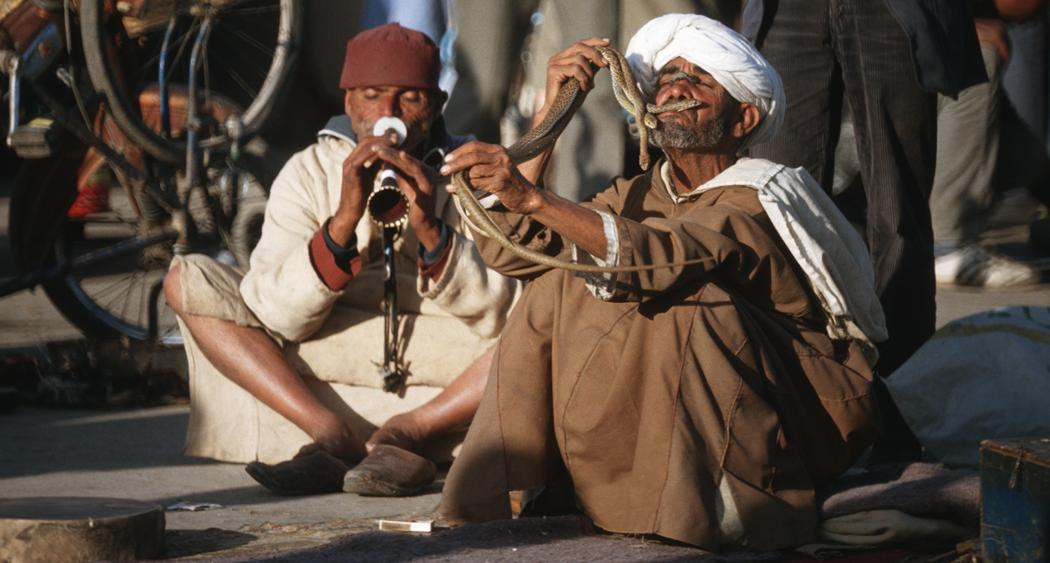 'offerings on the open market, within reach of anyone willing or able to give value for value received: far from the irreducible molecular order of the great industrialized European city: the hostility of the clock, the pressure of time, rush hours, infinite loneliness shared bumper to bumper'

'creating structures to welcome the world-wanderer' 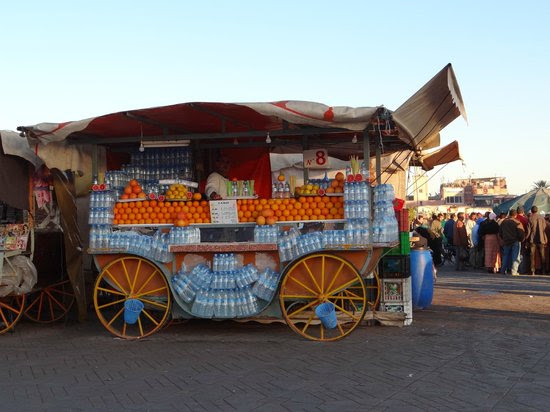 'survival of the nomad ideal as a utopia: a universe without a government or a leader, the free circulation of person and goods, land owned and used in common, the tending of flocks, sheer centrifugal force: the abolition of private property and hierarchy, of rigid spatial boundaries, of domination based on sex and age, of the ugly accumulation of wealth: emulating the fruitful freedom of the gypsy who respects no frontiers: encamping in a vast present of quests and adventure....a calligraphy that over the years is erased and then retraced day after day'

Here, in the gaudy market, his omniversal unipresent characters find a 'tiny little island of freedom and rejoicing in an ocean of wickedness and misery, giving them and giving myself the necessary strength to complete the day's journey, to gather up our belongings and prepare to move on, to seek shelter, to lull ourselves to sleep with the idea that tomorrow everything will be better and they will still be with you, as will I, all ready to invent new and even more marvelous adventures, finding a welcome refuge, if it be God's will, in the free and easy, kindly tolerance of the public square'

This is, of course, the endless presence, the eternal now--duplicitous and dramatic, monotonous and unique, shared and solitary, everything and nothing

The street market of life
Posted by rn at 3:20 PM No comments:

Andro Linklater’s latest and, sadly, last book (he died as it was being published) started as his attempt to make sense of the global economic crash and mutated into a paean to the potential and problems inherent in private property.

He knew this was an extraordinarily old-fashioned approach to modern fiscal analysis. But, as he writes toward the outset of Owning the Earth, “The idea of individual, exclusive ownership, not just of what can be carried and occupied, but of the immovable, near-eternal earth, has proved to be the most destructive and creative cultural force in written history. It has eliminated ancient civilizations wherever it has encountered them, and displaced entire peoples from their homelands, but it has also spread an undreamed-of degree of personal freedom and protected it with democratic institutions wherever it has taken hold.”

This shouldn’t give you the idea that Owning the Earth is a heartless, self-congratulatory free-market screed. Rather, Linklater’s villains are the Austrian School (those two patricians, Ludwig von Mises and Friedrich Hayek, in particular) and all those who confuse the production of individual wealth with democracy and the promotion of purely private interests with the public good. “The iron law of private property,” he concludes, “turns out to be a paradox. Although it promotes individuality, it only works by giving equal weight to the public interest.” His heroes, then, include Adam Smith (not for the “invisible hand” but for its corollary: the idea that the market is designed and tempered to the public interest), James Madison (for having “embraced the diversity of opinion as evidence of free society”) and Wolf Ladejinsky (who pioneered land redistribution while working for Douglas MacArthur in the 40s and early 50s.)

Linklater romps through history with the insouciance of Minnesota Fats attempting a five-ball bank-shot combination to either beat or sucker a pool hall opponent. The book hopscotches centuries and continents and moves from the Levelers to Lehman Brothers, with Locke, Lenin, Lincoln, Ladejinsky, Linux, and the Louisiana Purchase in between. He concludes that private property promotes democracy – but only when it’s an expanding resource, available to all, cheaply and efficiently. Once the frontier closes or is disposed of (or, in global intellectual property agreements, if patents held privately are given the force of law while varieties of communal ownership are not) the egalitarian and equitable teamwork between property and democracy breaks down.

His assertion that the massive government-led rescue plans developed after the recent financial meltdown proved that "the Austrian experiment had failed" may be an overstatement--after all, free market absolutists are still vocal, almost everywhere. But Linklater is more interested in small futures than big ones. As he notes, rivalries over land and resources may create vicious conflicts, but don’t always cause the many types of legal and quasi-legal sharing arrangements to rupture. “Even three wars between India and Pakistan have not caused either of them to break the Indus Water Treaty they signed in 1960. Underpinning these formal regulations for sharing water, as well as thousands of other informal arrangements, has been the understanding that it is worth limiting individual needs so that everyone benefits from a limited resource. However bitter the disputes, it is overshadowed [grammatical oddity in the original] by the realization that taking whatever one wants risks destroying the entire system and ruining everyone.”

Owning the Earth flips traditional pieties about property on their head. Linklater doesn’t cite Peter Kropotkin or Karl Polanyi or E.F.Schumacher or Elinor Ostrom – but his work is imbued with their spirit.

“There is an alternative to the single, ultimately unviable measure of success imposed by economics,” Linklater concludes. “Around the world and throughout history, neighborhoods have succeeded in a million different ways.”
“It’s the neighborhood, stupid.”

one querulous cavil: Oddly, Owning the Earth contains some grammatically questionable constructions and lots of oddball spellings (among them: Hayek is "Friederich" instead of Friedrich, the Chinese city Shenzhen is "Zhenzhen," Mao Zedong is spelled "Zhedong" on first reference, and George H.W. Bush is referred to as "George H. Bush.") Misspellings can creep into any volume, but these seem egregious.
Posted by rn at 12:21 PM No comments: