What a great idea.

AllAfrica offers news of a new plan in Ghana that offers savings and pensions for informal merchants. The plan launched as a pilot in 2005 and now has 40,000 members. Contributors are given a pass book. Half their contributions are held to provide pensions while the remaining 50 per cent can be used as a bank account from which the contributor can make withdrawals.

Officials estimate that 600,000 people in Ghana could join in the coming five years. This hybrid approach, recognizing the need for retirement money and the need to reinvest in businesses might have legs!
Posted by rn at 9:14 AM No comments: 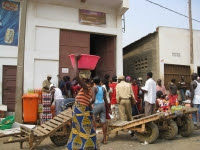 Angola's informal economy--street vendors selling everything from car stereo parts and locally-caught fish to fake perfume and Chinese flip flops--in markets like Roque Santeiro, which was founded in 1986, are now threatened by a ban on street trading. Inter Press Service has details.

Among the interesting facts in the article:

* Angola has a very high rate of entrepreneurship. One in four Angolans were involved in start-ups, significantly higher than other production-driven economies, like India and Colombia.

* an NGO formerly called the Sustainable Livelihoods Project (it's now known as KikiCredito) tried to replicate in Luanda the work that was pioneered by Grameen bank in Bangladesh. The project organized groups of 20 to 30 merchants with democratically-elected officials. In 2004, SLP had nearly 5,000 clients in Luanda and a second city, Huambo, and the project was hailed as a first-rate example of a successful micro-finance initiative.

* Out on Luanda's streets, however, at the bottom rung of the entrepreneurial ladder, life is harder than ever, thanks to the provincial government's new ban on street vendors. Teams of police patrol the crumbling pavements, chasing women from their patches, sometimes seizing their precious goods. The legislation was introduced to "clean up" Luanda and concentrate sellers in designated market areas like Roque Santeiro.

It remains a mystery why governments are determined to stamp out informal entrepreneurship when their countries clearly have so many other social and environmental problems to confront.
Posted by rn at 8:59 AM No comments: Ato Kwamena Dadzie, a journalist who bills himself as "Ghana's most irreverent," has a great take on the effort by Alfred Vanderpuije, Accra's new mayor, to drive hawkers out of center of the city. Money quote:

Let’s face it. The central business district of Accra is a commercial centre. The whole area is one big market and like every market we should expect the area to be a congested beehive of economic activity. Most African markets are like that. We’ve lived with it for decades and it’s hard to see why the mayor wants to change it.

These hawkers are on the streets because they need to survive. Government should be looking for ways to help their small businesses thrive instead of hounding them with batons, destroying their stalls and breaking their wares.

Destruction of the Warwick Early Morning Market in Durban, South Africa threatens 6,000 traders who together earn 1 billion rand, or about $123 million. Business Day has details.

PS: Sorry for the gap in my blogging. I spent the past few weeks myopically focused on completing a manuscript. Slow suffocation by paper. But I am still breathing and should have more time to post regularly now.
Posted by rn at 2:25 PM No comments: