the pen-pen is mightier than the sword 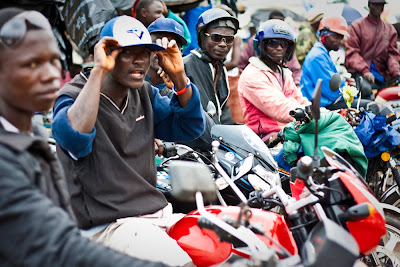 "Pen-pen." That's what unlicensed motorcycle taxis are called in Monrovia, Liberia, according to a variety of posts on this interesting blog called The Esteyonage.

Moto – or ‘pen-pen’ - drivers are exclusively young men, often written off as ex-combatants and criminals by society at large. In reality, most of them are super nice, and are driving bikes so that they do not HAVE to be criminals.

Pen-pen drivers spend pretty severe amounts of time on the road. Twelve hours is about average for most riders, but a lot come out and drive before or after a class, teaching, or working another odd job.

The blog has lots more on the cast-off clothing trade, itinerant water sellers, and roadside money changers.
Posted by rn at 9:05 AM No comments: