in Lagos: Grade A vs. System D

De Soto meets Fashola. Formalize the informal. That's what's going on in Lagos,Nigeria, as the state government has hired Hernando de Soto's Peru-based Institute for Liberty and Democracy (ILD) to conduct a census of informal businesses. This Day has the details.

It's understandable that government wants to come to terms with System D. As Wale Raji, the Permanent Secretary of the Ministry of Commerce and Industry, told the paper, 90 percent of the assets in the state are off the books. But where the Lagos government goes wrong is when Raji  suggests that this massive amount of capital --- the city accounts for more than 60 percent of Nigeria's industrial and commercial activity and 30 percent of the country's GDP -- is, in Raji's words, "not of many benefits to their owners apart from providing them accommodation. When it comes to business transaction, they have no value.”

The System D firms in Lagos do have value. And the big System D outfits are doing a massive amount of business. Five years back, when I was doing the reporting for Stealth of Nations, the bigwigs at Alaba International Market told me that their market's turnover was more than $3 billion a year. And that's just one Lagos market. In that context, de Soto's one-size-fits-all assertion that these markets constitute dead capital is simply wrong.

Businesses like those in Alaba don't need to become formal to gain access to credit. They do their own banking in their own way. Indeed, they have their own credit system. They have their own banks. If Fashola wants them to formalize and start paying taxes, they'll want to see a serious inducement--like an improvement in profit.

I hope to find out more about this when I'm in Lagos next week.
Posted by rn at 6:49 PM 1 comment:

Yu Hua gets it right in his New York Times Op-Ed in praise of piracy:


In the West, piracy is a matter of intellectual property — copyright, patents and trademarks — but in China, the issue is not just legal, but social.

Why are fake goods everywhere? ... [Because] businesses producing pirated and knockoff goods have intricate connections to local governments and officials. These enterprises are, plainly, major sources of tax revenue; less visibly, some officials have an economic stake in them.
But the most basic reason, in my view, is the huge demand for pirated and knockoff products. After more than 30 years of rapid economic development that made China the world’s second largest economy, there are still more than 100 million Chinese, mostly peasants, who make less than $1 a day.
...
Years ago, in a talk at a university, I said: “I am opposed to counterfeiting in all forms, but so long as poverty is a huge problem in China, I think it’s only proper that my books be pirated. I make enough to support my family from the regular sales of my books.” Some of my fellow writers disagree, but I still believe it.

This is similar to the situation in Peru that Daniel Alarcón chronicled in Granta a few years back, when he desperately searched for a copy of his own book in the counterfeit market. At the publisher's price, a single book would costs perhaps 20 percent of the average workers' weekly salary. So it is only logical that, as Alarcón reported, "being pirated is the Peruvian equivalent of making the bestseller list." Of course, when he finally found his own volume--looking shorter, wider, thinner, and less substantial than the original--he haggled and forced the seller to bring the price down.
Posted by rn at 10:06 PM No comments:

what we lose when we ban street trading

It takes a keen observer in a highly developed city--Hong Kong--to recognize what we lose when we ban street trading.

I would revise the thought this way: it is up to us to demand that government and the landlords get out of the way so we can work with hawkers to promote and encourage their businesses for the 21st century.
Posted by rn at 9:24 AM No comments:

why does India suddenly hate hawkers?

First Mumbai, where local leaders have vowed to rid the streets of vendors even as the minister for housing and urban poverty alleviation, Ajay Maken, has argued for a reasonable plan for licensing street sellers. Now Chennai promises that "all illegal shops across the city will be removed in four months."

Please explain the punitive approach in this normally tolerant country.

Most of the arguments cited in the articles seem to spiral around the charge that hawkers block sidewalks and force pedestrians into the streets--thus creating traffic snarls and the risk of road accidents. But banning all street vending is a blunt instrument. How about working with the hawkers to create a reasonable, safe approach? Everyone is for public safety, even street hawkers.

the right to the city -- not in China 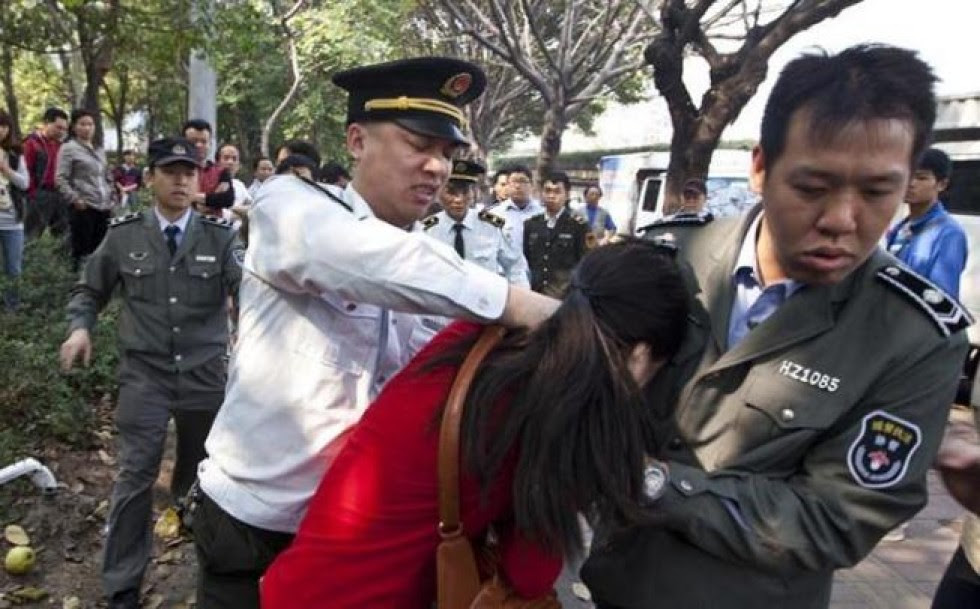 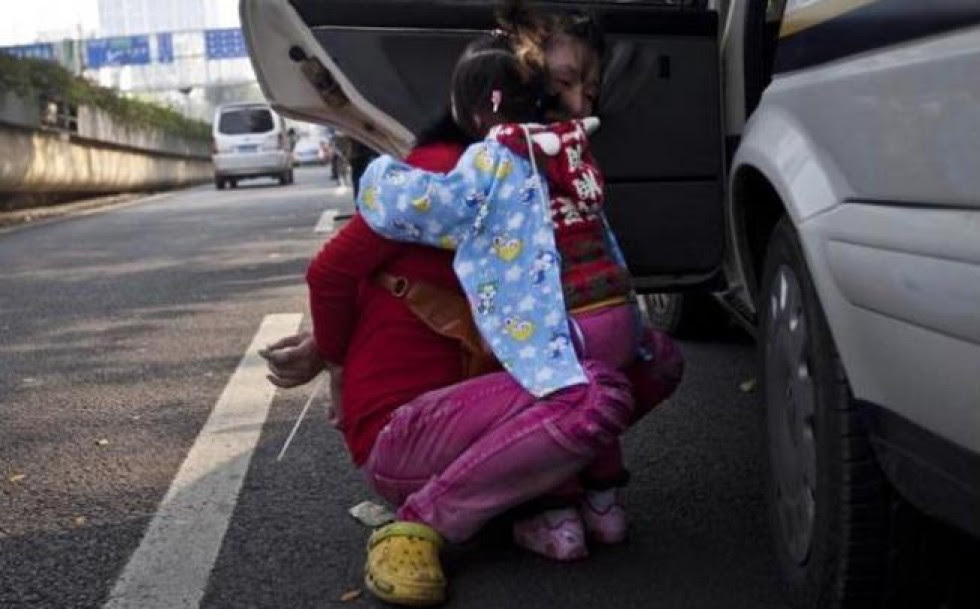 Chengguan--the often-violent city control officers in Guangzhou--have done it again: beating up a street hawker in front of her kid. In the photo below, the woman is crouching outside a police vehicle, handcuffed, her child clinging to her.
Guangzhou has become a class-ridden city--where most city development projecs cater to the rich while poor working folk can be violently harassed by local authorities. These photos come from the South China Morning Post, the English language Hong Kong paper. But the original article ran in Southern Metropolis Daily--a newspaper which is no stranger to conflict with authorities.Indeed, its sister paper, Southern Weekend, recently ran afoul of the national government when its reporters and editors protested when a propaganda editorial was substituted for a more hard-hitting one.
Posted by rn at 8:13 AM No comments:

Street sellers in Vatican City are doing a brisk business selling plastic sheets and umbrellas -- so the faithful waiting for the tell-tale smoke from the chimney above the Sistine Chapel can stay dry, the BBC reports.
Posted by rn at 7:56 AM No comments:

the deadly vicious circle in Tunisia

A bit more than two years after the revolution spawned by a Tunisian street vendor, Mohamed Bouazizi, who set himself afire because he was being harassed by the government, the authorities have cracked down even more strenuously on street selling. Now, another street hawker has paid the price. Adel Khazri, a 27-year-old vendor in Tunis who set himself on fire yesterday because the police would not let him sell cigarettes on the street, died in the hospital this morning. Tunisialive has the sad details.
Posted by rn at 7:48 AM No comments:

Semantics or substance? That's the question street vendors are asking now that Cape Town has moved the office authority over the informal economy from the city's Safety and Security Directorate to the Economic, Environment and Spatial Planning Department.

West Cape News reports on the change. “We need to ensure support and enabling for those enterprises in order to make sure tangible opportunities are available,” Garreth Bloor, who controls the Economic agency, told the paper.
Posted by rn at 1:03 PM No comments:

For a man who professes to treasure his city, Lagos State Governor Babatunde Fashola has adopted a punitive attitude towards its people. He's already razed the street market at Oshodi, criminalized street hawking, and attempted to demolish the waterside shack community of Makoko. Now, as The New York Times reports, he's taken a backhoe to Badia.

"More than one million of the city’s poor have been forcibly ejected from their homes in largely unannounced, government slum clearances," the Times reports. Of smashing down the Badia East neighborhood that was home to more than 10,000 people, the Lagos State commissioner of housing, Adedeji Olatubosun Jeje, told the Times, "What we removed was just shanties. Nobody was even living in those shanties. Maybe we had a couple of squatters living there.”

That comment shows just how brazen Fashola's people are. It's neutron bomb urban renewal: polishing the city by punishing the people, yet pretending the people don't exist.

I'll be in Lagos later this month and will report back on what I find.
Posted by rn at 4:12 AM 1 comment: