NOT ON THE STREET

The Lagos State Government has decided to ban all street selling, effective immediately, The Vanguard reports.

"This administration is set to make the trade unprofitable, as both both the street traders and buyers will be prosecuted under this renewed policy," Commissioner for Environment Tunji Bello, told the paper.

It's a strange thing: the Lagos State Government seems to believe that street selling in the root of all evil." At the same time, the article notes, Commissioner Bello and others in power admit that people must trade to survive and make a living in Lagos.

The government seems to want to punish the people for being in need. This is very Victorian stuff and will help destroy the urban fabric of Lagos.
Posted by rn at 12:59 PM 1 comment:

The pirated version of Walter Isaacson's Steve Jobs bio is a big hit in China, Eastday reports. Unfortunately, according to the article, some of these pirate editions may be fiction instead of fact: "Some pirated books' content is totally different from original book, despite an identical cover."
Posted by rn at 11:49 AM No comments:

how to fight street crime

The lede from the Nairobi Star (via All Africa) says it all: "The informal sector is the best tool to fight crime and offer employment to the youth."

The other facet of the story that's interesting is that the Kenyan government is apparently offering low interest loans to informal firms through something called the Youth Fund -- at interest rates that are way better than the banks or microfinance groups. But "the funds are lying idle" --most likely because people are worried that the government will use the knowledge of their business to go after their assets.

Until May 2011, only youth groups could take advantage of the program. But now individual entrepreneurs can apply as well.
Posted by rn at 11:17 AM No comments:

India is mulling how to provide social security benefits to its 430 million workers in System D, LiveMint reports. The government estimates that 94 percent of India's workforce is in the informal sector, and that they account for around 60% of India’s gross domestic product.

These ingenious entrepreneurs and street merchants are crucial to the nation's survival. But, as one economist notes in the article, India does not have a great track record in service delivery--and so the whole discussion might simply be an academic exercise or a ploy for the ruling Congress Party to win public support. “This is ambitious simply because we do not know how to implement it,” said S.L. Rao, Bangalore-based sociologist and former director general of the National Council for Applied Economic Research. “When we look at social security, we look at delivering services and money for taking care of health, education and insurance. To be honest, so far we have been incompetent in delivery of both services and money.”
Posted by rn at 12:04 PM 4 comments:

The talk I gave at PopTech last month is now online.
Posted by rn at 11:54 AM No comments:

the mountains are high and the emperor is far away

Reason Magazine takes you to a Chinese System D boomtown: Wenzhou, where businesses have joined together to fund the city's infrastructure.

Wenzhou is a commercial powerhouse. Unlike Beijing and Shanghai, though, it's the informal entrepreneurs who have made Wenzhou flourish. Here's how the article sets the scene:

Private citizens were the first to connect Wenzhou to neighboring regions by building roads, bridges, and highways, as well as the city’s airports and substantial portions of the dock. Even today the city is scattered with infrastructure investment firms through which groups of businessmen pool money to build the transport routes they all need to get their goods from factory to the point of sale. The result is not pretty. Aside from the confusion faced even by residents driving into the city, it is not uncommon to see sidewalks torn up to insert piping, with seemingly no intention of replacing the concrete. Nevertheless, the system is crudely efficient, merchants can all easily access factories, and the factories in this geographically isolated city now have sales networks that span the globe. ...  The streets around the railway station are covered in stalls selling $3 blue jeans and $5 boots. There’s a city block dedicated to baby clothes next to a street that sells plastic signs for bathroom doors. In one run-down alleyway you’ll see people repairing televisions, making blankets, and selling fruits, vegetables, and poultry (live or dead). Further outside the center, you can find small shops dedicated to aluminum rods, sheet metal, tire rims, and tires. ... Pool halls are set up wherever there’s open space that you can set a tarp over. Gambling dens are openly advertised. Taxi drivers often drive off the meter. The karaoke parlors are numerous, and almost all of them double as brothels. The poorest residents take part in one of the largest citizen recycling programs anywhere in the world. In an alley one family collects scraps of fabric to sell to the local textile mills, another hoards scraps of paper and cardboard to send to the paper mills, and in front of a lot that looks like it is being used for a garbage dump, a man has set up a secondhand goods shop. 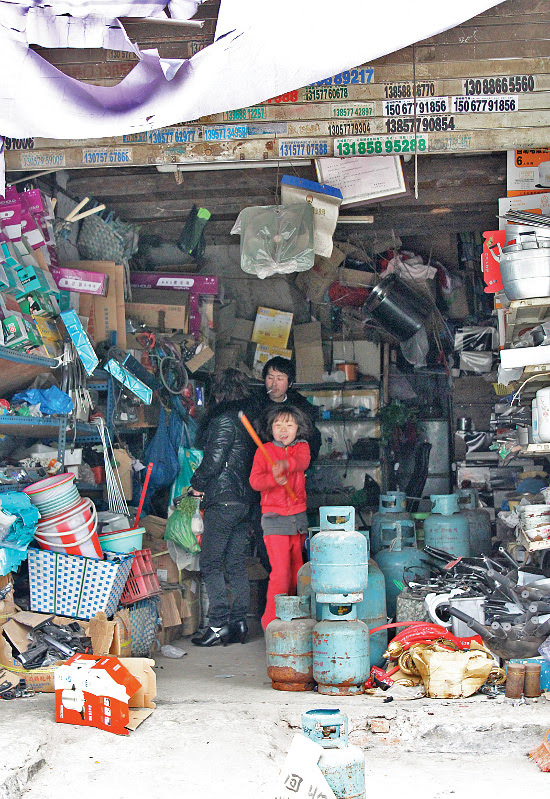 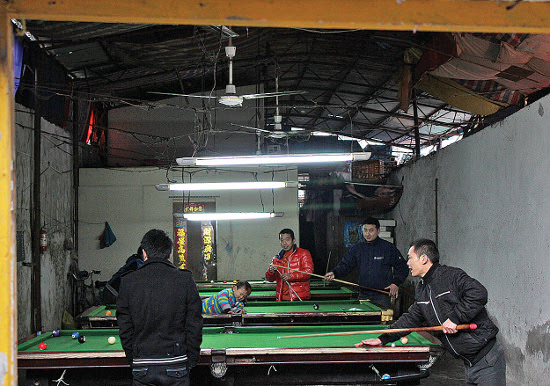 Hat tip to Zach for flinging this my way.
Posted by rn at 11:35 AM No comments:

you be the judge

Every time I get interviewed about Stealth of Nations and the global growth of System D, I get asked a variation of this question: "Aren't workers in the informal economy being exploited?

For all those who think the formal economy is so great for workers, check out this cringe-inducing article from The Guardian. The British paper discovered that the government is sending young unemployed people in the UK to work for major businesses, in what the government calls a work experience program. The catch: they have to work for free. If the unemployed people refuse to work for no pay, they risk losing their $80 per week unemployment stipends.

James Rayburn, a 21-year-old job-seeker, told the Guardian that, with his unpaid job at the supermarket chain Tesco, which earned a $6 billion profit last year, "it [was] as if I walked into the store and said, 'Look I'll help.'" Even if you want to consider his unemployment benefit a salary, if Rayburn worked 30 hours a week, his effective wage was $2.66 an hour.

So you be the judge. Which is more exploitative: System D--which actually pays its employees--or this scheme cooked up by the government and some supremely profitable businesses--which doesn't?
Posted by rn at 10:11 AM No comments:

If the Times of India is to be believed, India is about to do something excellent and revolutionary: protect the livelihood and security of the nation's 10 million street vendors.

Housing and urban poverty alleviation minister Kumari Selja told the paper that the government "is working on an effective and practical central legislation to protect livelihood and social security of legitimate street vendors,"  The proposal is aimed at enabling vendors and hawkers an honest living and intends to prevent harassment of street vendors by police and civic authorities.

The law would be administered locally by committees made up of vendors, government employees, traffic police, land-owning agencies and officials from local banks.

The devil, of course, will be in the fine-print and implementation. So I hope that any Indian readers of this blog, or others who follow these kinds of proposals closely, will keep us posted as the proposal moves forward.
Posted by rn at 6:24 AM No comments:

Huye Town, aka Butare, the second-largest city in Rwanda (population 77,000), has declared that it will evict all hawkers from the city's streets.

Pascal Sahundwa, the Executive Secretary of Ngoma Sector, told The New Times newspaper that the move was meant to restore order and neatness and to help local businesses. "We are determined to stop this because the business is causing losses to traders operating in stalls and shops as well as the state," he said.

The authorities make no claim that the hawkers are engaged in criminal activity. Indeed, the newspaper reported, most of the hawkers simply sell clothes, shoes and fruits. The administration wants the hawkers to take stalls in the town market. But, as one hawker told the paper, "We will only stop operating on the streets the day authorities give us affordable places. We cannot afford the high charges in the market, it is beyond our ability."
Posted by rn at 1:03 PM 2 comments:

A small town in England gets it right

Merchants in Ilfracombe (population: 10,800), in the Shire of Devon, in the South West of the UK, have decided that, during the celebration of the lighting of the city's Christmas lights on Nov. 30th, they're going to confront System D streetsellers. But they're not going to kick out or attempt to criminalize the unlicensed hawkers of glow sticks, balloons and toys. Rather, they're going to ask the street vendors to pony up -- to offer to help to defray the costs of the event, which is funded and staffed through volunteer contributions.

"We are going to ask these sellers for a donation towards the event," said Mark Goodenough of the High Street Traders' group. "If they refuse we will tell them to move on and we may even sell our own products at half the price to discourage them."

This is great: rather than criminalize the informal hawkers, the merchants of this town have decided to embrace them and give them a chance to contribute to the event that brings the town together.The North Devon Journal has details.
Posted by rn at 3:34 PM 2 comments:

the potential of mobile money

The growth and acceptance of secure mobile payment technologies will benefit street markets as well as financial institutions, a Nigerian banker says. Citing the obviously "huge funds in the informal sector," Obinnia Abajue, head of personal and business banking division (PBB) for Stanbic IBTC Bank, suggested that mobile money will bolster economic development by helping to "identify economically active people, who were  previously in the shadows, where it concerns the huge informal cash economy, enabling them to have access to credit facilities."

Business Day has the details.
Posted by rn at 12:32 PM No comments:

In the ten months since the January street demonstrations that led to the overthrow of the Mubarak regime in Egypt, System D--a.k.a. the informal economy--has grown by 20 percent, Daily News Egypt reports. Acccording to researchers at the American University in Cairo, 3/4 of the young people in Egypt are now working in System D. Amina Shafik, a consultant for workers’ organizations and columnist for Al-Ahram newspaper, said that workers in the informal sector are being treated just like the freedom demonstrators were: "They are treated like criminals," she told the newspaper. "They are always chased by the police."

Indeed, the right to make your living on the street should be a fundamental freedom in the region. As Ibrahim Awad, director of AUC’s Center for Migration and Refugee Studies, put it, "After all, what triggered the first revolution in Tunisia was an attack on a street vendor.”
Posted by rn at 12:23 PM No comments: