Rome Mayor Ignazio Marino has started a crackdown on street peddlers in many of the famous piazzas of the Italian capital, so many are now plying their trade in the Vatican's St. Peter's Square. Wanted In Rome has details.

Are these street merchants really such an "invasion" that they require massive civic action?
Posted by rn at 6:30 AM No comments:

Just what Africa needs: an executive MBA program that will teach business to "local managers working for international firms" in the Democratic Republic of Congo. The FT has details. Tuition for the one-year program will cost almost $9,500 per student. The Frankfurt School of Finance and Management says that its presence in the DRC offers “great market opportunities.” The FT comments that "the DRC, a country of 75m people at the heart of the African continent, represents an untapped market."

This, in a country that, last year, won the award for the worst income situation in the world, with a GDP per-capita (the current stand-in for per-capita income) of $231. Millions in the DRC are missing out on basic education and the average teacher received perhaps $40 a month (that's $480 a year--but since salaries are rarely paid on time, parents often band together to pay extra to teachers to keep them on the job.)

When will we ever learn that true development and education and transformation has to start at the bottom.
Posted by rn at 10:59 AM No comments:

Here's the conundrum. Sub-Saharan Africa is home to


Plainly, the idea that the invisible hand of the market will solve everything--the myopic economic view of the world--is not working. Economic growth doesn't mean that fewer people are hungry or that more people have jobs.

"Growth and increasing food production are not enough," he tells Inter Press. "In Africa we need to look particularly at access to food. Many undernourished farmers suffer from not having access to land, while others cannot buy the food they need because it is not cheap enough for farmers to buy according to their salary, while many of them are jobless and without income. The challenge is to approach all these things at the same time."

His agency wants a global commitment to zero hunger in Africa by 2025, or a dozen years from now.
Posted by rn at 10:22 AM 1 comment:

The village-based system of System D money lenders is so embedded in Cambodian culture, the Phnom Penh Post asserts, that it is blunting attempts of formal banks and microfinance institutions to spread around the country.

Bun Mony, president of the Cambodia Microfinance Association (CMA), told the paper that informal lending was widespread before banks and microfinance institutions began sprouting up all over the country. “So it became . . . the culture of Cambodian people.”

“Borrowers and money lenders know each other on a first name basis, residence, credit history, etc, and do not require borrowers to fill out application forms,” Kang Chandararot, director of the Cambodia Institute of Development Study, added.

Informal loans can carry an interest rate of 10 percent per month, the paper reports. That's usury, I agree.

Still, despite the eye-popping interest rates, there's a larger point here. The traditional system works, albeit with problems. So why must we force people to adopt the western, formal, arms-length  transactions of banking? Why do economists and politicians continually deride traditional ways of doing business that have worked reasonably well for people for decades? Why do they insist on stripping away relationship models of business? Why can't banks organize village cooperatives, which function like System D lenders, making handshake deals based on firm and longstanding relationships of trust, but with less onorous rates?
Posted by rn at 8:31 AM No comments: 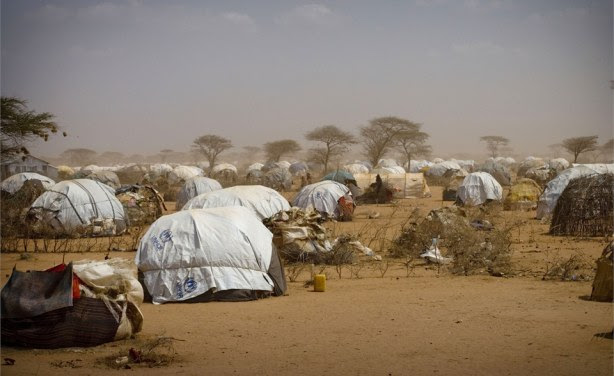 A new United Nations High Commission for Refugees (UNHCR) analysis reports that there were more than 45 million displaced people at the end of 2012, the highest number in almost two decades. While that may seem a tiny on a planet of 7 billion, look at it this way: one in every 200 people on earth has been displaced. No wonder the UN agency calls displacement 'the new 21st century challenge.'
Posted by rn at 9:16 AM No comments: