System D is bigger than we thought

System D in Africa could well be bigger than previously estimated, according to this article from Investment Europe. Citing a report from Old Mutual Investment Group, the article suggests that the informal economy in African countries could be the same size as the legal economy.

Key quote: The size of the informal economy is not certain, but many economists estimate that the Nigerian and Egyptian economies could be more than twice the size of their respective official figures.

Another interesting idea -- that informal trade, rather than thriving during times of unrest, may also be challenged by sectarian violence: the slowdown in the north of Nigeria is due to the safety issues making it more difficult to service its neighbours, Niger and Chad.
Posted by rn at 3:48 PM No comments:

Biztech Africa has discovered that it's sort of hard to grow an IT sector when your country has no electrical power. With tales of woe from Dakar, Bamoko, and Kinshasa.

The UN's IRIN News Service reports on current conditions in Timbuktu, the Malian desert crossroads that was occupied by various groups in favor of sharia law before the French army pushed them out in a military operation early this year.

From Ousmane Maïga, a Timbuktu resident who fled the city and recently returned: “Now it’s up to the government to bring peace and reconcile the different communities.”

From Seydou Baba Kounta, a professional tour guide: “Since the Islamists left, nothing has been done. We don’t sense the presence of the state. The state is not here. I appeal to the state to work hard so that Timbuktu emerges from this obscurity.”

Seems like a recipe for paralysis. The Mayor suggests that the government barely exists (“Eighty percent of the civil servants are absent. Even if they were here, their offices are empty. There’s no equipment, no computers, nothing - not even a chair.") while the citizens demands government action.

Without a doubt, reconciliation is a priority. But perhaps, in this seeming power vacuum, there is space for Timbuktu's citizens to take some baby steps, using their sweat and sensibility to begin the painful process of re-inventing the city, its economy, and its governing structure. A little social anarchism would be a true revolution after the horror that played out during the past year.
Posted by rn at 8:10 AM No comments:

There really are things outside of economics. So says economist Ricardo Hausmann in this essay posted on Project Syndicate. Some solid sound bites from the former chief economist of the Inter-American Development Bank and current Harvard Professor:

'It requires many years of training and abstract economic thinking to miss the obvious.'

'Economists and policymakers have disregarded the physical aspects of urban life.'

'Governments will have to start doing some good things, not just stop doing some bad ones.'


While it's heartening that a respected economist now admits that his fellow professionals seem to have no idea of real life and that government ought to do more than simply minimize evil, I find something cold in Hausmann's analysis. What's missing from what he calls the physical aspects of urban life? People. The men, women and children who are the actors/motivators/doers/makers and sometimes victims of urban life.

The informal sector is mostly a consequence of the fact that people are disconnected from modern production networks,' Hausmann writes, 'an inefficiency that will not be resolved simply by reducing the cost of registering a business or forcing small firms to pay taxes. What is required is a redesign of urban space, including subways and dedicated bus lanes, and a more integrated approach to housing, social services, and production areas.'

Rethinking the production of space is a useful practice, but the way Hausmann seems to envision it, it's a top-down approach, and therefore just more of the same.

a tough take on System D

The Hindu reviews a new book (At Work in the Informal Economy of India, by Jan Bremen) that takes a rather different view from the one I take in Stealth of Nations.

I haven't seen the book, but, according to the review's summation, the System D street economy in fact means waged labour on crushingly oppressive terms. The supposedly self-employed include street vendors, who are “easy prey” for the police, sex workers hawked around by their pimps, home-based workers or stallholders permanently in debt to suppliers and agents, and the like.... A “floating army” of the jobless fills the daily-wage markets, which are in effect slave-auctions.

Can we please stop denying that System D is the realm of growth.

"The enthralling swarm in the souk...So this was the city: a never-ending frenzy, clashing images, sharp noises, overlapping and fusing colors....He had nothing to sell and was simply going along to get to know the world, the real one...The souk was already a huge magic theater where people were meeting and crowding each other."
--Tahar Djaout
Posted by rn at 6:35 PM No comments:

In Tehran, steel gates or the street economy

Iran raised taxes by 30 percent last year and the government has proposed another 38 percent increase this year. In response, many merchants in Tehran's Grand Bazaar have rolled down their steel gates and closed their businesses. Money quote, from Hossein, a merchant who spoke with the Financial Times: "These days you can rely on your mobile phone like street dealers who pay no taxes for buying and selling dollars. But if I sit in my shop then I have to pay tax" In some sections of the Bazaar, only 14 percent of the stores are still open.
Posted by rn at 12:15 PM No comments: 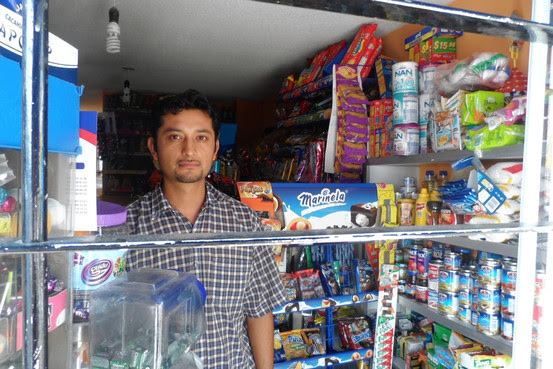 For the past dozen years, Mexico has pushed homeownership for the poor. Instead of squatter communities, the government arranged for the state-run mortgage agency to provide loans to people buying into massive cookie-cutter neighborhoods built by favored construction companies. Today, two of the big-three homebuilders are near bankruptcy, and the third is headed that way. Shares of all three have dropped 60 percent since the beginning of 2013.

But this is not simply a business story about a government subsidized bubble. It's also a story of ingenuity in the face of adversity.

Aldo Ortiz, one of the 2 million Mexicans who took a chance on a mortgage and a dream of a suburban home--his in a community calle Parque del Cipres outside Mexico City--wound up quitting his job in an electronics company because of the impossibly long commute (3 hours a day, round trip) and opening Miscelaneo "el Cipres", a System D mini-mart, in his living room. There, he sells beer, water, tortillas, snacks, canned goods, detergent, etc.


The Wall Street Journal has the details.
Posted by rn at 11:25 PM 1 comment: