For those that might have lost track of the news in the haze of the holidays, The New York Times ran a strong article the day before Christmas documenting the amazing futility of disaster relief in Haiti. Among the staggering factoids:

"No one wanted to do debris removal," Josef Leitmann, manager of the Haiti Reconstruction Fund, one of the entities set up to manage the earthquake relief, told the paper. "It's not sexy. There are no ribbons to cut." Added Priscilla Phelps, who was a consultant on some of the efforts, donors "wanted little pastel houses and kids with ribbons in their hair to put on the cover of their annual report[s]."


Part of the problem, Leitmann told the paper, was that many people--including some very high in Haitian government--wanted to use the earthquake as a tool to de-densify Port-au-Prince. "There were all sorts of fantasies about shutting down the mess that is Port-au-Prince before people started to understand that there is a huge amount of capital built up in the city and chaotic as it is you don’t throw it out."

Clearly, the missing ingredient in this relief effort were the people themselves and their haphazard but effective local structures. Why shut out their initiative. Wouldn't the aid groups have been much more efficient if they had been willing to work with System D entrepreneurs and associations--in other words, with the people they were hoping to help.
Posted by rn at 7:59 AM 2 comments:

A major French industrialist has proposed a new French revolution based on super-competitiveness, to shock the country back to economic growth.

"In France, there is not actually agreement that companies must be competitive to create value," Louis Gallois, who this year stepped down as CEO of EADS, the parent company of the European airplane manufacturer Airbus, told The New York Times. "We need to create that consensus first, and after that people can fight over sharing the benefits of competitiveness."


The problem here is that what is of value to Monsieur Gallois, who remains on the board of EADS and spoke with the Times from his "gilt-trimmed office in central Paris," wearing his "Légion d'Honneur pin," may not match with what's of value to a worker in his firm.

Indeed, neither Gallois nor anyone else quoted in the article specifies exactly what France must do to become competitive. The article implies that a panoply of tax breaks, lower corporate tax rates, and relaxed labor rules, making it easier to hire and fire, are what's needed. But this is the toolkit always advocated by big business--achieving profits by punishing workers.

Further, the Times article notes, "Culturally, France and many of its leaders are wedded to the idea that a social safety net -- despite its expense -- is needed to protect society from the ravages of lassez-faire economics. Economists say a pullback would have to happen to ensure competitiveness."

While I'd love to endorse Gallois' vision of a French economy in which "small and midsize firms can grow and create jobs," the "competitiveness shock" proposed by a global industrialist whose firm's revenues were close to 50 billion euros in 2011 ($66 billion, U.S.) is likely out of synch with what small businesses need to grow.
Posted by rn at 9:59 AM 2 comments:

the true size of System D in Mexico

It's amazing what a change in methodology can do. In a new study, Mexico's National Institute of Statistics and Geography discovered that twice as many people were working in System D than it initially had thought.

Now, the agency estimates that 29.3 million people, or 60.1 percent of the country's workforce, is in System D. The previous estimate was 14.2 million.

How did the Institute come up with new figure? It suddenly realized that it could count "all people who are economically active but lack access to the social security system," La Prensa reports. That makes sense.

The newspaper also reports that the people in System D earn, on average, one-third less than workers in formal jobs. The article suggests that this is a difference in take-home pay, but it's hard to judge the comparison because the paper doesn't describe how the Institute measured income. It's true that System D workers often earn less, but most often they take home a larger share of their income than formal wage laborers. 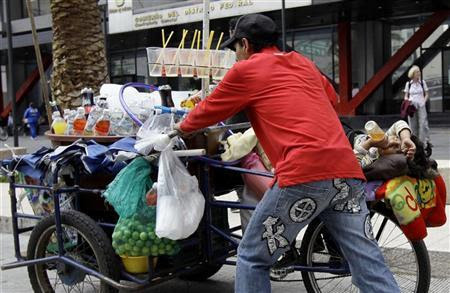 Mexico's millions of street vendors have little to gain the new labor law the government has engineered to bring them in from the cold, Reuters reports.

Indeed, the news agency notes, the so-called market reforms seem little more than a transfer of rights from labor to manaement. The law, Reuters reports "aims to make work contracts more flexible by providing for trial periods for new employees and specifies that productivity, not seniority, should be the main criterion in assessing a worker's suitability for a new position. It also caps the amount of back-pay workers can receive after winning a lawsuit for wrongful dismissal."

This, of course, only makes life better for big businesses, but won't do anything to improve life for System D entrepreneurs.

Similarly, part of the proposal to allow hiring of part time workers for as little as an hour a day seems unlikely to be attractive to energized entrepreneurs. And another proposal that would liberate short-term hiring ignores the fact that many firms already hire temporary workers for cash under the table.

Mexico's leaders would do well to consult "El Progreso Improductivo" ("Unproductive Progress")., by the amazing essayist Gabriel Zaid. It's only been translated into English in fragments. But what fragments there are (courtesy of Ibsen Martinez) are amazing: introducing faith into the discussion of economic progress, and evaluating bribery as an economic system.
Posted by rn at 10:22 AM No comments: