Police in Vadodara, a city in the Indian state of Gujarat, have started a community policing project in partnership with local street vendors, the Times of India reports.

"Hawkers are good source of information and they can also help us in detecting crime and preventing it too. In fact, just few days back a hawker nabbed a vehicle thief and handed him over to the police," police commissioner Rakesh Asthaana told the paper.

Officials in the city of 3 million have dubbed the plan 'Hawk Eye.' It has the potential to create a much more productive civic relationship between government and street merchants. Vendors are, after all, eyes and ears on the street. They are not criminals. They are a legitimate part of society.
Posted by rn at 9:24 AM No comments:

The Lagos State Government has attacked the street traders at Computer Village, Next reports.

There's no allegation that the street sellers at the market are unscrupulous or criminal. Only the Governor's uncompromising devotion to wiping out street selling.

This puts merchants in a serious bind. They have lost their investment -- often given to them on credit by more-established businesses in the market -- but are so desperate for work that they will probably return to the street despite the risk. "The things they took away were given to me to start market, and they have seized everything," one vendor told the paper. "And government did not create employment for us, so people will start looking for job again." As a mobile phone salesman put it, "We cannot steal so we’ve been trying to earn a honest living, but it’s been made difficult by the government."

Lagos Governor Babatunde Fashola is doing nothing about the real corruption, which involves the area boys -- a cadre of strong-arming thugs who are in league with the officials of the local government (a community political structure) -- who are extorting money from the street traders. But he has turned the hopeful street entrepreneurs at Computer Village into criminals.

After the earthquake, the stealth economy 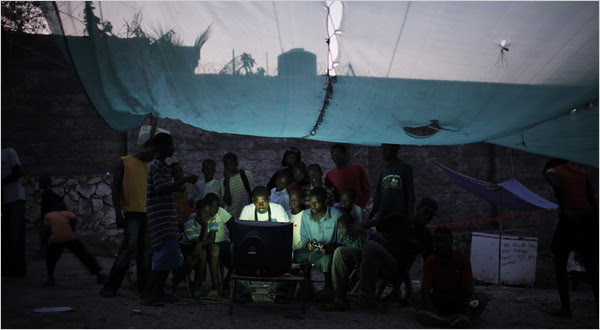 The New York Times offers a view of the post-earthquake encampment set up in the Pétionville Club, the 9-hole golf course in Port-au-Prince.

What's significant: With 44,000 residents living under tarps, this new neighborhood has "a quasi-mayor, a ragtag security force, a marketplace, two movie theaters, three nightly prayer services, rival barber shops and even a plastic-sheeted salon offering manicures and pedicures." The article goes on to highlight the commercial success of these refugees in their own city.

"Everything is for sale, like hair extensions in baggies and padlocks for the wooden doors that many have installed in their tarp-covered shelters. Inside a United States Agency for International Development tent outfitted with freshly made benches and a flat-screen television, one entrepreneur charges about 12 cents for screenings of a “Terminator” movie and the Malaysian kung fu film “Kinta.” Another young businessman rents out his Playstation in one of the designated 'child safe' areas, a green netting atop four poles. A woman runs a bar atop a crate."

But the article concludes that international agencies want to move these self-sufficient and entrepreneurial people out of the city: "Moving families from encampments like the Pétionville Club entails finding and preparing some 1,500 acres of land — one relocation site recently opened and another is being prepared — and then persuading people to move outside the metropolitan area, international groups say."

This neighborhood is functioning and, compared to many other encampments, relatively healthy. Why break it up? Why send it out of the city? These are the very people who ought to be at the center of the renaissance of the Haitian capital.
Posted by rn at 1:41 PM 3 comments:

Swindon, a city of perhaps 200,000 people west of London, is pushing to redevelop its town center by getting rid of street traders, many of whom have been working there for better than 25 years. The Swindon Advertiser reports.

Why do political authorities always see those who sell flowers and donuts from carts on the street to be blight? The truth is that street sellers make the urban experience more vital and charming and boost business for everyone. That's why pushcarts have re-appeared, in a highly planned form, in malls and shopping centers. That's, in part, why street fairs and farmers markets are popular.
Posted by rn at 6:43 AM No comments: