The New Age reports that the Metro Pretoria government has signed a groundbreaking deal with four networks representing street hawkers to spend 10 million rand (or about $1.2 million) to give impromptu sidewalk vendors official stalls.

From the article: Tshwane mayor Kgosientso Ramokgopa acknowledged informal trade was a contributor to the local economy, providing opportunities for emerging entrepreneurs and creating jobs.He pointed out hawkers plying their trade on the metro’s streets were responsible for R600m of the Tshwane fresh produce market’s annual R2bn turnover.

In other words, street hawkers alone account for 1/3 of the turnover at the city's produce wholesale market. A good economic reason to cooperate with and not exterminate these vibrant small-scale entrepreneurs.

The deal comes in response to a series of wildcat strikes, in which hawkers irate at militaristic city efforts to demolish their stalls and confiscate their goods blocked streets around the capital, News24 reported. Which shows that, if System D workers shed their fears and organize public collective actions, they can achieve great things.
Posted by rn at 8:13 AM No comments:

One in five owners of businesses in the UK started out in System D/the informal economy, according to a new report by a British NGO. And almost 2/3 of those who ran businesses without getting registered or incorporated reported that they did so to determine if their enterprises were viable--while only nine percent said they turned to the informal sector in an attempt to cheat the government and make more money. What's more, almost half of all merchants polled agreed that working in System D "is often a necessary step as part of the journey towards becoming a successful entrepreneur.”

The study--produced by the Royal Society for the encouragement of Arts, Manufactures and Commerce (RSA) and based on in-depth interviews and a survey of 595 business owners across the UK--concludes that government should take a less punitive approach to System D businesses--and should cajol and encourage firms to formalize rather than prosecuting them for being informal. And it asks the heretofore heretical question of whether governments should learn to live with the informal economy.

can we learn to live with the informal economy?

the informal economy can be the perfect protective environment that many small fledgling micro entrepreneurs need as they make the transition from unemployment to the formal sphere. In this way, it is possible to conceive of the informal economy as a fixed quantum, not to be reduced in size but to be controlled in such a way that individuals flow through it as seamlessly as possible....without going some way towards accepting informality as an integral part of the economy, there is a danger of never being able to fully realise the assets of existing and would-be micro entrepreneurs who depend on this shielding environment. 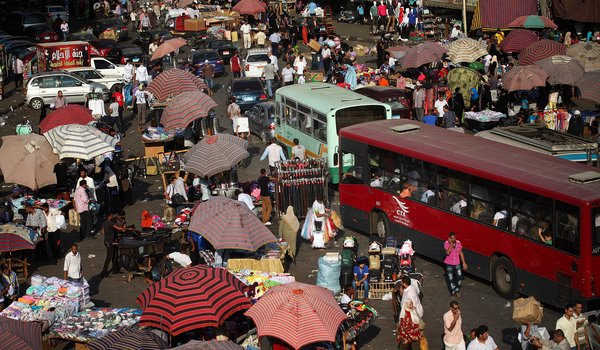 Check out this rational yet wrongheaded economic argument parroted by The New York Times today: traffic snarls, caused in part by a phalanx of unlicensed street vendors, cost Cairo "as much as $8 billion in lost productivity, delays and excess fuel consumption, according to the World Bank."

First, there seems to be a math problem. On page 131, the World Bank report computes the total cost of congestion in Cairo as close to 14 billion Egyptian pounds. At today's exchange rate that would equal $2.3 billion, far lower number than the $8 billion number cited in the article.

But also, according to a vendor quoted in this article from Al Arabiya, each street seller actually pays 200 LE (livres égyptienne--or Egyptian pounds), or about $33, per month for the right to be at the roadside--money that is supposed to go to the government. And the article implies that if the government were willing to replace a vendor's monthly income, the payment might amount to 600 LE (approximately $100 -- or an income of about $3 a day.) Take the Times' own low estimate of 10,000 street vendors and multiply the earnings out to an annual figure and you get this: 72 million LE, or almost $12 million. That's a rock bottom reflection of how much income vendors will lose if they're forced off the street. And the full value of all their transactions is far more than that, involving leagues of wholesalers and the importers they buy from. Add in the human cost of lost livelihoods on the families of all these merchants, and you begin to see the problem with the World Bank's one-sided calculations.

What's more, The Times reports that Cairo is desperate to promote tourism and investment. Tourists, you can be sure, don't want to visit a Cairo bereft of street vendors. While the cacophony can seem chaotic and bewildering, it is also an indelible part of the Cairene experience. There's an economic value in that as well.

The larger point is that purely economic arguments make all human issues money issues. Cairo may need to take some major steps to address traffic congestion (since, as the World Bank notes, more than 1/3 of what it includes in the cost of congestion comes from excess fuel consumed in traffic jams, regulating the number of cars on the street, imposing emission controls on trucks, and bulking up mass transit options might be better answers for the city--and Al-Shorfa reports on another approach involving street vendors: creating one-day markets.). Forcing street vendors to bear the burden of what's obviously a much larger problem simply shoves the blame down on those who can least afford to suffer the consequences.

Remember: it was a street vendor in Tunisia, aggrieved that he was harassed and prevented from doing business by the government, who set himself on fire and inadvertently lit the match that started the Arab Spring.
Posted by rn at 4:11 AM 2 comments: