china recognizes the power of the informal

This is interesting: India's Economic Times newspaper reports that China and India will collaborate on surveys of each country's informal businesses. The Indian survey will concentrate on Delhi and Surat. The Chinese portion will look at Shanghai and Shenyang, capital of Liaoning Province.

While India has strong organizations that advocate for informal workers, it will be interesting to see how China uses the information the surveys will bring forth. Will the world's largest country crack down on the informal in order to gain tax revenue? Or will it take a more pragmatic (and, dare I say, englightened) approach and work to strengthen the unlicensed businesses?
Posted by rn at 8:28 AM 1 comment:

Two articles on Africa show the importance of engaging the informal economy.

First, The Daily Trust from Nigeria points out that government policies must be retooled "to encourage our small entrepreneurs who constitute the informal sector with a view to developing and enhancing their businesses." The writer suggests that 5 to 10 million Naira per local government per year (a pittance: $30,000 to $60,000) is all it would take to make the local economies bloom.

Second, the BBC points to the Eastleigh neighborhood of Nairobi, one of the most run down communities in the Kenyan capital -- but, significantly, not one of the poorest.

Marketplaces, and a million little lean-to repair shops and small-scale factories are what most urban Africans rely upon for a living. But such is their distrust of government officials that most businesspeople in the informal sector avoid all contact with the authorities.

Kenyan architect and town planner Mumo Museva took me to the bustling Eastleigh area of Nairobi, where traders have created a booming economy despite the place being almost completely abandoned by the government. Eastleigh is a filthy part of the city where rubbish lies uncollected, the potholes in the roads are the size of swimming pools, and the drains have collapsed. But one indication of the success of the traders, Mr Museva said, was the high per-square-foot rents there. "You'll be surprised to note that Eastleigh is the most expensive real estate in Nairobi."

Though the architect suggests that, if the businesses trusted the government, they might pay some taxes, that's not necessarily the most important determinant of success. If the government would participate in the commercial growth and communal well-being of Eastleigh, businesses would grow, employment and salaries would grow, and new businesses would start up, thus bolstering the economy, improving public safety, and helping the city and the nation.
Posted by rn at 7:49 AM No comments:

the informal economy of the world's oldest profession 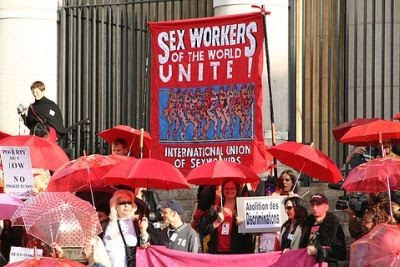 In These Times documents the ways in which sex workers are organizing for their rights.

The article sensibly notes that sex work (which, beyond simple prostitution, includes jobs such as working as an escort or exotic dancer) "presents critical, and perhaps necessarily uncomfortable, challenges for the labor community," and adds that "sex workers occupy a unique space on the economic landscape, fraught with questions of human rights, social values, and the dividing line between exploitation and labor. Policies governing the industry range from outright bans (the United States) to varying degrees of regulation and legality (across Africa, Asia, Europe and South America)."

Still, the magazine reports, "a union movement is just beginning to crystallize in the sex sector. Sex workers in Argentina, Holland and India have established formal labor associations. The International Union of Sex Workers, founded in 2000 in London, has earned recognition from the Trades Union Congress and been incorporated into Britain's GMB union."

Are there any good reasons why people working in the world's oldest profession shouldn't have all the rights and protections that other workers have?
Posted by rn at 12:38 PM No comments:

A food fight between the center-left city government and the right wing, quasi Fascist provincial government has caught street hawkers in Venice in a bind. The local government of the famed city of canals has traditionally been lenient towards street selling. But the state government has now placed 100 soldiers on the city streets to round up hawkers, who mostly sell to tourists. The right-wingers say the hawkers have become more "aggressive, angry and menacing" and are dealing in many counterfeit designer bags. Adnkronos has details.

There has to be a better way than simply criminalizing street hawking.
Posted by rn at 9:05 AM No comments:

a violation of the spirit of Fela Kuti

In the Vanguard, Femi Kuti, son of the famed Nigerian afro-beat rocker Fela Kuti, speaks his mind on the Lagos government's shut-down of the great music hall founded by his father, the Afrika Shrine:

“It was opened one week after it was closed. We were given 48 hours to address some issues and after they were served papers. Before the time they were given to address those issues passed, the government swooped in and closed Shrine down.”

According to Femi, the government held his management responsible for the profusion of street traders who sell to music-loving revelers. Femi’s answer: "It is left for them [the government] to clear the street traders and not a job for Afrika Shrine."

The government also said it closed the Shrine for noise pollution violations and creating traffic jams. To this, Femi responded that "Fashola [Babatunde Fashola, governor of Lagos State] should close down all Churches and Mosques. The security men placed there by Fashola should do their job and control traffic effectively.”

Femi was particularly irked that "Fashola banned street parties one week before Felabration," the annual celebration of Fela's birthday. Fela would have turned 70 this year.
Posted by rn at 9:26 AM No comments: