Is it better to sell on the sidewalks or in officially created outdoor markets? In Yerevan, Armenia, where Mayor Karen Karapetian has started enforcing a ban on street hawking, vendors now face the unappetizing prospect of moving to one of the city's proposed markets or being fined 10,000-20,000 Drams (or up to $53) if they are caught selling on the street. Vendors are concerned because people have to go out of their way to get to the markets, while business is easier on the street. Arka News Agency has a brief account.
Posted by rn at 8:27 AM 5 comments:

the problem with cheap pizza

A trade organization in Finland has claimed that you can judge whether you're supporting the underground economy by the price of your pizza. Any take-out pizzas that cost less than 6 euros (or almost $9), the Finnish Hospitality Association claims, must be supporting underpaid labor in the underground economy. But the country's pie guys disagree, asserting that they're willing to put in long hours and work for low wages. As pizza merchant Ahmed Seikh noted, though "he only takes home around EUR 1,000 every month ... he’d rather have low-paid work than none at all." Ice News, which offers 'News from the Nordics', slices up this Scandinavian pizza disconnection.
Posted by rn at 12:58 PM 1 comment:

a new definition of transparency 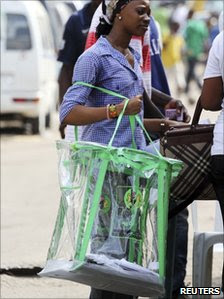 OK: the new ballot boxes for the Nigerian elections are transparent. Now, how about the elections themselves? The balloting, delayed a week after some administrative snafus, is scheduled to go on for the rest of the month, with Parliamentary elections held tomorrow, the Presidential election set for April 16th, and the contests for state offices and governorships on the calendar for April 26th.

(my transparency: thanks to Andrea for the tip about the transparent ballot bags)
Posted by rn at 9:03 AM No comments:

A reporter covering the brutal eviction of hawkers from a bridge in Accra, Ghana, was himself arrested and manhandled by government officers. Daniel Nonor, from The Chronicle newspaper, was hauled off after he chanced on the violent eviction and took a picture of the fracas. A worker with the city's Sanitation Department told the newspaper that the reporter should have been beaten and thrown in the gutter, rather than simply arrested. The street vendors, most of them women, were taken to court--though it is not clear what charges were filed against them. The Chronicle (via Modern Ghana) has the story.
Posted by rn at 2:37 PM No comments: