an amazing fact about the street economy! 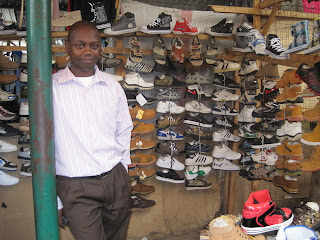 I learned this when I met Maina Mwangi, a shoe vendor at Muthurwa Market in Nairobi, and one of the leaders of KENASVIT, the Kenya National Alliance of Street Vendors and Informal Traders.

He offers a particularly acute and specific take on the common complaint that street market vendors don't pay their fair share in government fees and taxes. Maina reports that a typical merchant who rents a storefront in downtown Nairobi pays 7200 Kenyan shillings ($87) per year for a license to do business in the Central Business District. By contrast, for his right to sell from his kiosk, Maina pays Ksh 50 a day to the City Council. That's about 60 cents, which sounds pretty good until you do the math: it's Ksh 1,500 a month or Ksh 18,000 ($217) a year.

The real deal: Maina pays two and a half times more than legal merchants pay for the right to operate downtown. So much for the supposedly unfair advantage street market merchants have over their legal brethren.

{Praise be to Zach for putting me in touch with Maina}
Posted by rn at 10:15 AM

Thank you for writing this wonderful book Robert, it was an enjoyable and informative read!

I found you through Collapsenet and The Lifeboat Hour and really appreciated hearing what you had to say!